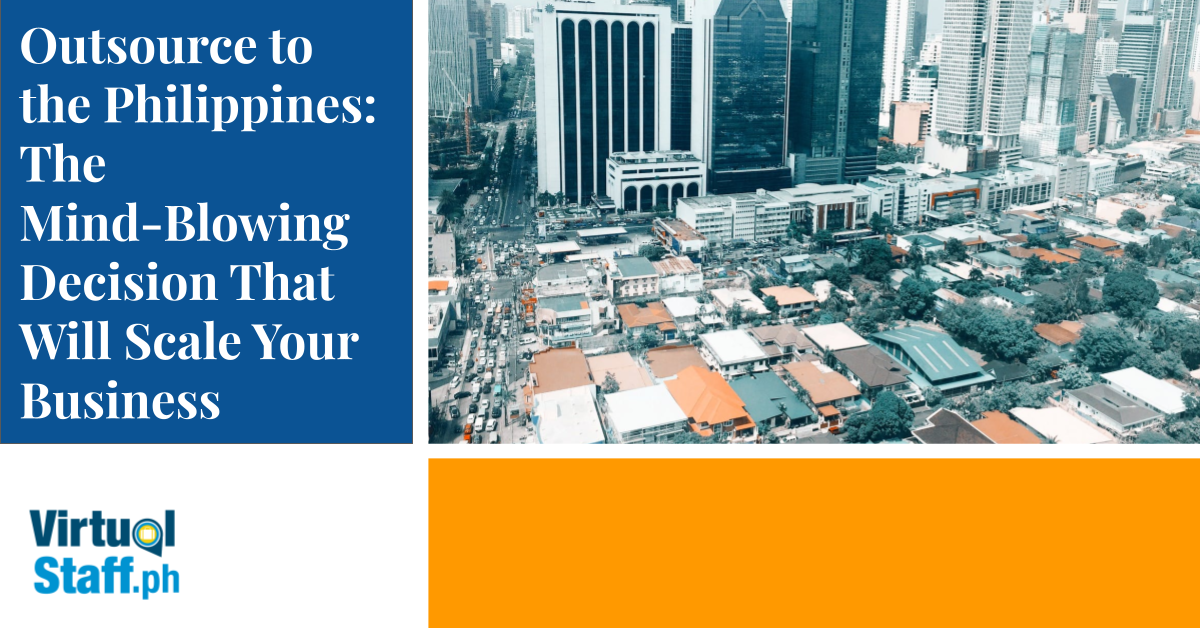 Outsource to the Philippines: The Mind-blowing Decision that will Scale your Business.

Let me ask you, what is the reason for you starting your business?

Is it to build wealth? is to get independence? Is it for some other reason that gives you some sense of meaning, enjoyment, or security?

If I answer it from my viewpoint, one reason is FREEDOM, financial freedom, and beyond purely economic, and the freedom to choose when I work and what tasks I do within my business.

Some of you reading this will have big companies. You might make millions of dollars in revenue every year, and you could be employing dozens, if not hundreds of people.

Would you benefit from outsourcing to the Philippines if you had a big company?

I know that some of the biggest companies in the world use VirtualStaff.ph to outsource to the Philippines.

I know that because I've had the honor of personally meeting Michael Brodie (CEO), and I've seen some of the clients that they work with.

I've also referred people to VirtualStaff.ph, which is why I felt comfortable writing this article and sharing it with the world.

The fact is, the bigger your business is, the more money you will save when you outsource to the Philippines. It's like the compound effect.

Imagine if you do that with 50 staff?

So the answer is a resounding yes!

Suppose you're a big company or a medium-sized business, for that matter. You will benefit big time when you outsource to the Philippines.

However, before you decide to outsource, I highly recommend you read the article "Philippines Outsourcing: The guide to doing it right," it breaks everything down for you and probably answers almost all the questions you have on the subject of hiring remote staff in the Philippines.

Outsource to the Philippines: Is it worth it for the independent entrepreneur?

I know many online entrepreneurs who had no employees before hiring their first Filipino virtual assistant.

Their businesses often consist of two to three full-time virtual assistants, one of which handles the social media, marketing, and outreach, and the other who runs customer support, admin, and data entry.

For those entrepreneurs, outsourcing to the Philippines and hiring a virtual assistant was key to eliminating the stuff in the business that they both sucked at and hated doing.

Their businesses grew since they worked less! Sounds crazy, right? If you just read that statement, then you'd think I was some late-night tv info guru. I'm not!

So, how did they grow my business by working less?

It's simple. They just hired people, and it allowed them to take a step back and focus on their core strengths, which included product selection, negotiating with manufacturers, and overseeing the business as a system independent of them as a person.

The key to growing your business as a one-person band, or solopreneur, is to figure out your strengths early, get some revenue coming in, create a basic system, and immediately hire a virtual assistant.

It's the best thing a lot of those business people did. Yet, for most people, as natural control freaks who usually try to do everything themself, it can be hard to outsource and delegate tasks.

When did I hire my first Filipino virtual assistant?

I hired my first VA exceptionally quickly, probably around eight months of launching my business.

After I had got the business's profit up to only $2000/month. That, for me, was the time I could afford to hire a good quality, full-time VA for $5.00 per hour.

I think at first they worked for me for 30 hours per week, and over the next six months, as my business got busier, I gradually increased them to 40 hours per week or 8 hours per day.

However, at the $5.00 per hour level, I hired somebody good, which is why I'd suggest not paying less than $5.00 per hour to hire skilled people who will be with you for the long term.

Over the next 18 months, I grew that consultancy business substantially.

No actual logic or principle ties you to the $2000/month profit figure I gave above. It's just the level I was comfortable with when hiring my first virtual assistant.

I chose that because, at that level, I knew I had the beginnings of a solid small business that was producing steady cash flow and could and was growing at a level that allowed me to take an extensive picture outlook.

I also wanted to stop working like crazy and instead work only a couple of hours a day on the high-level stuff in my business.

The mind-blowing reasons why you should outsource to the Philippines

Have you ever thought about this? You're an entrepreneur, but you forgot to attain the freedom you were dreaming of?

Here is the ANSWER, you're now allowing yourself to take a step back, take a top-level view, and delegate most of the day-to-day tasks to skilled virtual staff.

With the aid of a Virtual assistant in the Philippines, you are empowering your business to scale faster.

Take tasks you hate doing and outsource them to your Filipino virtual assistant.

I'm not advocating being lazy. I am, however, supporting that you are probably wasting a bunch of time, and you don't need to.

If you work 10 hour days, and 8 hours of that day is simple stuff that you can hire somebody else to do, then that to me is a waste of time. Unless, of course, you enjoy doing that stuff.

The most valuable commodity we all have is time.

Yet, strangely most people don't really value their own time and instead commit to spending it on stuff they don't even like doing.

Want to eliminate wasted time from your life?

Then it would be best if you were outsourcing to the Philippines and hiring virtual assistants or virtual staff. It's that simple.

How much does it cost to outsource to the Philippines?

The following information is from the official VirtualStaff.ph Philippines outsourcing ultimate salary guide is based on the most up-to-date and accurate data of writing this article.

The salary rates above are based on hiring somebody full-time (160 hours per month), not set in stone. They are simply a guide.

The best way to see the REAL salary rates is by simply checking out the thousands of Virtual Staff profiles on the VirtualStaff.ph marketplace. See what real-life VAs and remote workers want to be paid. This is better than theory, and it's reality! Another great way is to download this free e-book that will walk you through how much you should pay to your VAs according to the current prevailing market rates.

Learn more about outsourcing to the Philippines?

The two articles above I believe you'll find helpful. When I first started hiring virtual assistants and outsourcing to the Philippines, I became overwhelmed by the sheer volume of online information.

I can personally vouch for the articles above because they are simple and easy to understand.

Hire Staff in the Philippines?

The Easy Way to Hire Staff in the Philippines!

Search for jobs on the Philippines safest home-based jobs marketplace!

CATEGORIES
SUGGESTED FOR YOU